On September 4th, 2019, the most recent Nintendo Direct presentation included another update on Animal Crossing New Horizons. New Horizons is the newest addition to the Animal Crossing franchise and will be released for Nintendo Switch next year. This brand new preview was better received than the last update when Nintendo revealed the games release date would be pushed back to March, 20th, 2020. However, things are looking up for fans of the franchise, because the new gameplay preview is chalk-full of some very positive changes. Not to mention the graphics look utterly beautiful!

The premise of New Horizons involves a brand new Deserted Island Getaway Package designed by Nook Inc. It is unclear whether players will be mayors like in Animal Crossing New Leaf, or just fellow villagers like in previous games. The Nintendo Direct began with Tom Nook introducing the promotional video of his new Getaway Package, implying that players will once again begin their Animal Crossing journey indebted to Tom Nook. The ‘deserted’ portion of the title is also consistent with the other games commonality that involves starting from scratch on a town. Or island, in this case. I was at first taken aback by an island setting, but it does seem like a natural progression for the game.

Now let’s talk about what there is to look forward to in this brand new game! Just like in previous games, players start out with tents sold to them by Tom Nook. Well now, these tents can be placed anywhere in the game, including on the beach! Players can also now place furniture items outdoors! This is a huge change, because in previous Animal Crossing games, most pocket items simply looked like small leaves, presents, or fossil icons when dropped outside. You’ll also notice from the picture below, there are more options for skin color and hair types. Previously, there were no choices for curly or textured hairstyles. The preview also revealed new lengths and shades of clothing! Flower crowns are available, too! 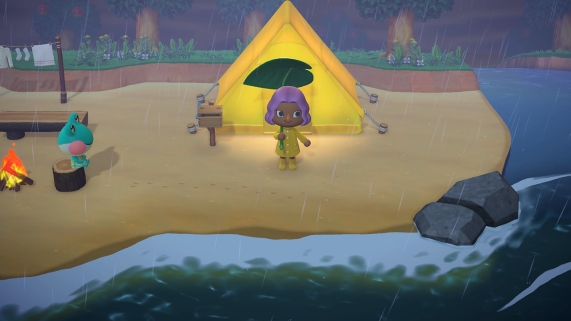 As far as actual logistics go, players can now cross rivers whenever they want, instead of having to use bridges. Gardening gets a lot easier in New Horizons, too, with tree and flower relocation! The days of re-planting trees and flower seeds are over! Now, instead of waiting days for trees to grow, players can simply uproot the entire tree and place it in its new location. 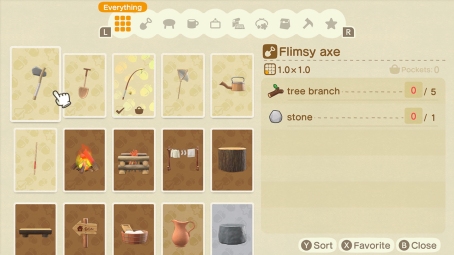 Speaking of trees, besides bearing fruit, when players shake New Horizons trees, they will drop tree branches for crafting! I will admit, I was a bit unsure about the crafting option being added to the game, as it seemed to be a reminder of the terrible Pocket Camp, but this newest preview made me less opposed to the idea. There are new recipes you can acquire to craft different tools and furniture. And players can purchase them from the Nooks, too. So crafting is totally optional.

Another big feature added to the game are Nook Miles. 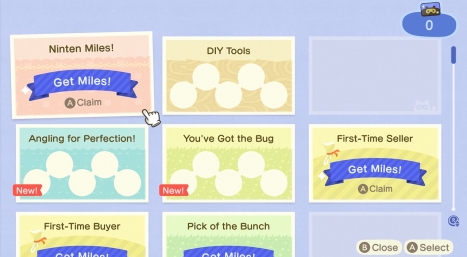 Similar to the CAT coupons and badges seen in Animal Crossing New Leaf, Nook Miles are tracked based on achievements and activities. Collecting these miles will help players unlock more recipes and special items. Other main facets of the game are largely the same, like fishing, planting, and bug catching. It is unclear whether or not fossils and deep sea diving will be part of the game play. But don’t worry! Just because this game takes place in a beach-y setting, doesn’t mean the only season is summer. New Horizons will feature the same seasonal changes presented in every other Animal Crossing game, complete with the cherry blossoms, mushrooms, and snowflakes we all know and love.

Last but not least, the improvement I least expected but that was most in demand: PATHWAYS! That’s right folks, in New Horizons players will be able to design their very own pathways around their island! From the Nintendo Direct, it looks like the paths will be plain dirt. They are certainly not as fancy as all the custom pathways players used to painstakingly create by hand, but they are still cute! Maybe the AC team will surprise us yet again and add a customizing element in some way. My main question is: do these new pathways mean grass deterioration will be a thing of the past? I’m eager to find out.

All in all, I think this game looks phenomenal. I believe it has the potential to keep the classic Animal Crossing nostalgia alive with the contribution of a few new twists. I’m glad the AC team took extra time to improve the game further. I cannot wait to get my hands on a copy and start building my own island!

Posts containing the following are against library rules and will be deleted before posting or removed by library staff:
1. Copyright violations
2. Off topic comments
3. Commercial material/spam
4. Duplicated posts from the same individual
5. Obscene, profane and/or abusive posts
6. Specific and imminent threats
7. Libelous comments
8. Images
By choosing to comment you agree to these rules.

Here is the link for the full social software policy.

This blog has moved to fountaindale.org/blog and is no longer active on this website. Check us out at our new home!